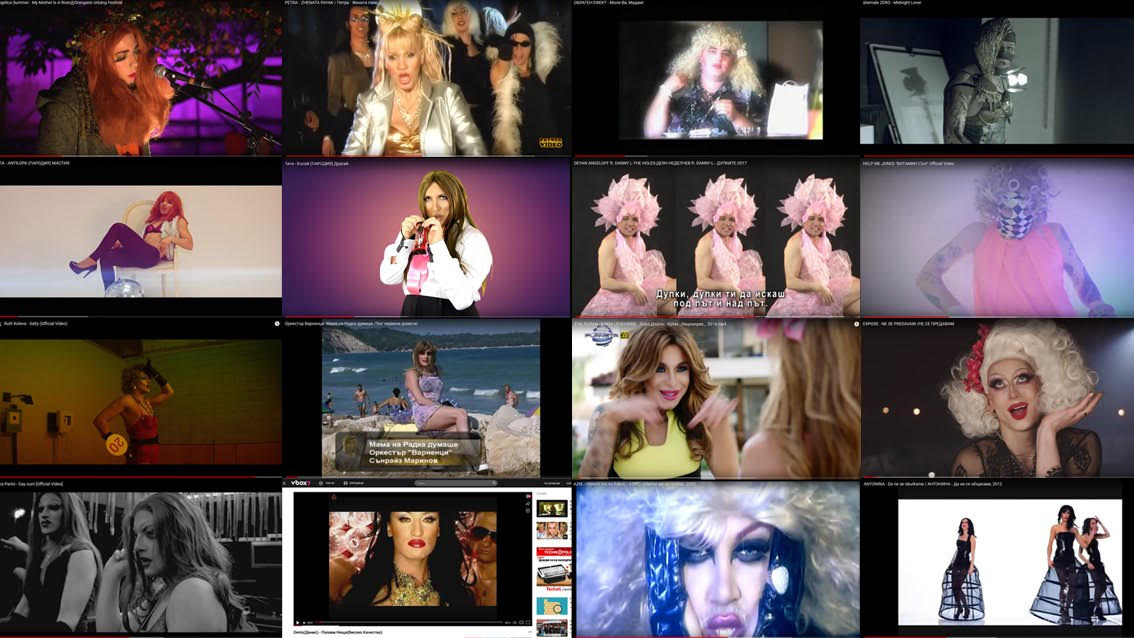 Contemporary art today is influenced by practices and phenomena that arise from drag culture, and we tried to show this in the Bulgarian context with our exhibition at the gallery “Structura”. In this sense Bulgaria is not only not isolated from the world , but also has adequate examples to offer for the relationship between art and drag. But what is the significance of this connection? What is the weight and importance of drag for the artists themselves? What about the very community of queens and kings themselves who are the inspirers of these artistic practices? What are the important themes and problems coming from drag culture that contemporary art faces today? In this discussion, we will look for answers to these questions in order to create a context and understanding of the relationship between the two phenomena, which need their explanation to the general public.

Malina Yank is among the most picturesque Bulgarian Queens in the last few years. A well known club scene face, she gains true popularity after winning the Benediction Drag Race 2019 where she threw a surprise not only with her impressive outlook but also her live rap performance. After being spotted by the Vault party label, multiple invitations ensued for many and various stages, even ones outside the queer community. Euphorically embraced wherever she goes, her Instagram followers grow ceaselessly, and often her posts are dully noticed by world renowned drag art pages. A publication of her picture in the French queer edition Garcon Magazine is among her latest international recognitions.

Mihail Vuchkov began his career in the field of media in 1998 as the TV host of MM TV. Subsequently he changed various positions as a director, producer, screenwriter and program director of the same TV. In 2007 he graduated from the Media Arts program at the New School University in NYC. Upon his return in Bulgaria he worked as editor, casting director and executive director for Chouchkov Brothers, Old School Productions, Constantin Entertainment, BTV and Nova TV. In 2010 he changed the TV industry for cinema. Ever since he works as PR and marketing strategist, responsible for the marketing strategies and advertising campaigns of various international and Bulgarian movies such as: Knickers, The Foreigner, Farewell, Mom, Shelter, Stoichkov, Dusk: Dawn, The Three Musketeers, The Invincibles, Benzin, 12A, Lilly the Little Fish, No Оne, Valerian and the City of a Thousand Planets, Yatagan, Bad Girl, Action.

Boris Kostadinov is a curator and art critic - lives and works in an international context between Berlin, Vienna and Sofia. He is the Director of SCOPE BLN, Berlin. His projects are in the field of contemporary art - installation, photography, video & film, multimedia, painting, sculpture, public art, conceptual design, architecture, sound and interdisciplinary forms. They explore the interaction of art with political and geopolitical realities, economics, social processes and theories: economy of art, art as a social or activist gesture, art as a political platform, gender art issues. The second guideline of his work is art & technology. Such projects are defined by artistic practices that moderate relationships between elite science, future forecasts and social consciousness.

Vladiya Mihaylova is a curator and cultural studies scholar. Since 2007 she is part of the team behind Sofia City Art Gallery and the curator of Vaska Emanouilova Gallery, where she works on contemporary art programs and with the gallery’s museum archive. Her interests lie in cultural history, contemporary art, the social, political and educational aspect of art institutions. Mihaylova has collaborated as a curator for artists’ public space projects, self-institutionalizing platforms, educational initiatives, etc., among which long-term projects with a wide social impact such as Kiril Kuzmanov’s Project 0 (2010 – 2014) for the space of Kapana in Plovdiv, 0gms Gallery in a Drawer of Ivan Moudov (2010 – 2013); she is the initiator and curator of the ongoing project “The 90s: Beginning of the Myth” (2015 -) for popular culture during Bulgaria’s transition. In 2015 she was the curator of Sofia Queer Forum titled “Sweet Union”. In 2017 she was the curator of Open Arts Foundation’s jubilee program as part of the NIGHT/Plovdiv Festival, as well as of a wide-ranging exhibition presenting young artists at Sofia City Art Gallery called “Shifting Layers: Young Art at the Museum”. In 2018 she was the artistic director and curator of the main program of the NIGHT/Plovdiv Festival titled “Common Place”, as well as the finisage “Sofia Tomorrow”, presenting the multi-year project “Vision for Sofia”. Among her latest projects is Katarzyna Scheda’s “A Place along the Window” (2020), created specifically for Bulgarian context.